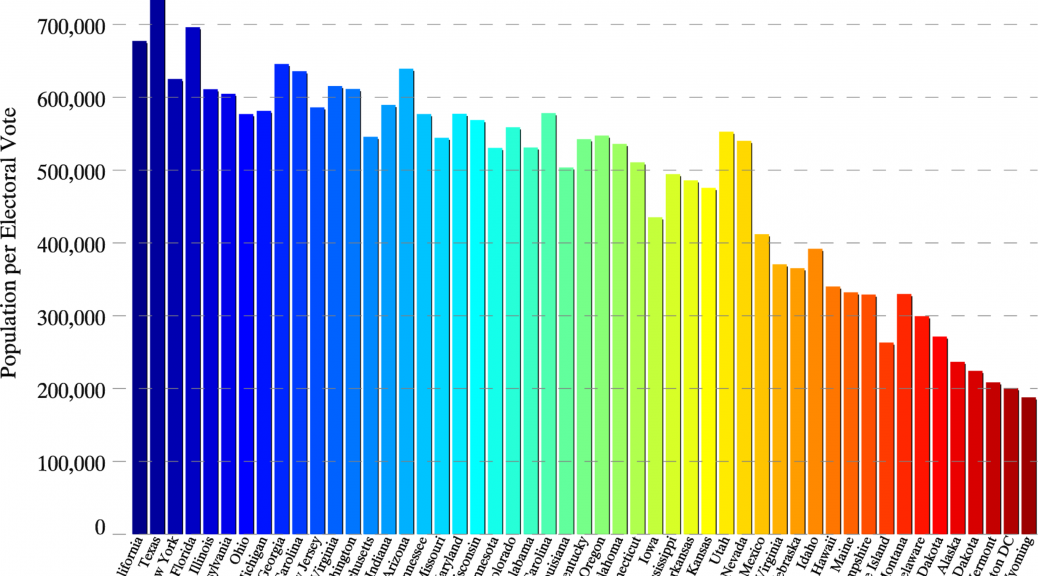 I have a lot of things I want to write about in the wake of Trump’s election, but I’m going to start with the fact that we need to abolish the Electoral College.

The Electoral College is an elitist institution, created on the theory that individual citizens could not be trusted with voting for the president directly.  Hamilton: “A small number of persons, selected by their fellow-citizens from the general mass, will be most likely to possess the information and discernment requisite to such complicated investigations” as who should be presidents. So he wanted (and got) an indirect election, through the electoral college. Then some states gamed the system by forcing all their electors to vote in unison, and so other states felt compelled to follow suit.

And we still have that, two hundred years later. [1]Maine and Nebraska partially excepted, since they allow splitting their votes.

A constitutional amendment is difficult. The closest thing currently would be an interstate compact to have electors towards the winner of the popular vote of the nation, not the particular state.[2]https://en.wikipedia.org/wiki/Electoral_College_(United_States)#/media/File:State_population_per_electoral_vote.png It’s been ratified by 160 electoral college votes, but wouldn’t take effect until 270 votes worth of states approve.

The last time there was an attempt at an amendment, in 1970, it was killed by the Senate. “The lead objectors to the proposal were mostly Southern senators and conservatives from small states, both Democrats and Republicans, who argued abolishing the Electoral College would reduce their states’ political influence.”[3]https://en.wikipedia.org/wiki/Electoral_College_(United_States)#Bayh.E2.80.93Celler_Constitutional_amendment

What, what? Small states have more influence? Indeed they do. Here’s a graph. This is citizens per electoral college vote.

The reason for this is Article 2 clause 2 of the Constitution.[4]https://en.wikipedia.org/wiki/Article_Two_of_the_United_States_Constitution#Clause_2:_Method_of_choosing_electors It says that states get one elector per senator and per representative. Every state has two senators, and a minimum of one representative. The theory was that majority states might oppress less populated states; I think that the framers may not have contemplated what a wide range of populations we have, 220 years later. If you live in a high-population state, you are effectively being disenfranchised. The problem is — as it often is — that only the people with power have the ability to change how the power is allocated, and they are reluctant to give it up. This is so blatantly a misallocation of power, though, that it is worth fighting for.