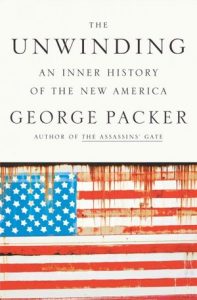 Something changed in America around 1970. If you read political economists, it might be variously characterized as the end of the New Deal, globalization, national productivity separating from average pay, deindustrialization, the beginning of the income inequality spike, or the rise of neoliberalism. Those are hard to digest in the abstract. Packer tells the story of these changes, but through biography. The chapters are fairly short and mostly independent, although some characters recur as the book progresses from 1978 to 2012. Each chapter is told as the stories of people: mostly ordinary people who were in a position to be particularly representative of a particular part of the power cycles of American life.

Tammy Thomas is a Black woman in Youngstown, Ohio, born at the apex of Black inner-city success, when well-paying blue-collar jobs in steel factories had been a fact for a generation; during her lifetime Youngstown collapses due to jobs moving to lower-pay locations, the short-sightedness of local elites, and the indifference of far-away capital that dismembers its industry. She manages to navigate it all, living factory life and eventually becoming a activist against the forces that ravaged her home city.  Jeff Connaughton goes through the politics-lobbying-politics revolving door, wavering between his desire to change the world and the desire to get American-dream wealthy. Dean Price is an energetic, self-help-book reading entrepreneur, trying to succeed in the businesses of truck stops. He succeeds at first as an outpost of big oil companies and fast-food franchises, but finds that it is very, very hard to succeed when he tries to convert it to a biodiesel  business that keeps its profits in the community. The city of Tampa is a recurrent theme, showing ground-zero of the housing crisis; the Hartzell family stands out: because they are living on minimum wage working at Wal-Mart, they can only afford to shop at Wal-Mart. All of these are based on first-person interviews, and I was very aware that I was reading something written by a journalist: the stories are detailed, vivid, and Packer really lets you inhabit the lives of the people he is writing about.

Scattered throughout there are biographies of well-known figures. Although there were more, the collection that stood out for me were Sam Walton, Oprah, Jay-Z, and Alice Waters. These characters are self-made millionaires, American Dream success stories. Also among these is Peter Thiel, a PayPal founder, venture capitalist, well-known for his libertarian and pro-Trump political stances; he differs in that Packer actually interviewed him and Thiel shows up in several “Silicon Valley” chapters.

These chapters on self-made American elites show the startling contrast between the haves and the have-nots. The individuals are not caricatures, but fully understandable as humans. They demonstrate that each of them, after they hit the stratosphere culturally and commercially, becomes separated from ordinary Americans and fully immersed in the sense of being self-made royalty, beholden to no one.  They stand in stark contrast to the chapters about ordinary Americans. You’ve got Tammy Thomas in one chapter, a single mother trying to raise a child on $7.30 and hour at a factory in Youngstown, and then you’ve got Oprah in the next chapter saying “A black person has to ask herself, ‘If Oprah Winfrey can make it, what does it say about me?’ They no longer have any excuse.” Alice Waters did change the way Americans think about food, but it is hard to imagine Tammy Thomas shopping organic. Sam Walton just wanted to open some big stores, and was always modest and homely even as he suppresses unions and turns main streets into economic wastelands. These self-made elites at least approximately seem to have their heart in the right place and just seems like she hasn’t thought through the values of the system in which they have succeeded; if they have cognitive dissonance between their success and the failure of others, they suppress it well.

Thiel, though, does seem to have thought these values through that are only implicit in the behavior of the other elites. He comes across almost like a malignant Vulcan: with contempt for other humans, except those that are as successful as he is, or that he feels will be as successful as he (and even then, perhaps only as a good investment). He feels like technology will create a utopia, if only welfare beneficiaries and women didn’t muck it up by voting for people that don’t really understand capitalism. It is not really clear, though, how that would affect the lives of Tammy Thomas, or Wal-Mart employees like the Hartzell family. It would be a utopia . . . for people as competent as Peter Thiel.

Packer’s brilliance is that he clearly has a bias, but it is subtle, a slope that shows up in the quotes he chooses and the intersections of the characters. The top Amazon review for this book starts off with “First off, this is not a polemical book with Packer trying to thrust his viewpoint down your throat. Packer’s own voice is largely absent from this book. Instead, he lets his characters speak for themselves.” That’s sort of true, but the juxtapositions of the elite and working-class characters, the successes and the failures, the small fry getting squashed and the elites clinking glasses in catered parties, tell a story of extreme class separation loud and clear. At one point Packer quotes Tom Perriello, then a Congressman from Virginia,  saying “Empires decline when elites become irresponsible.” It’s a passing quote by a passing character, but when I came across it 70% of the way through the book, it stuck with me as Packer’s implicit but central thesis of this book.