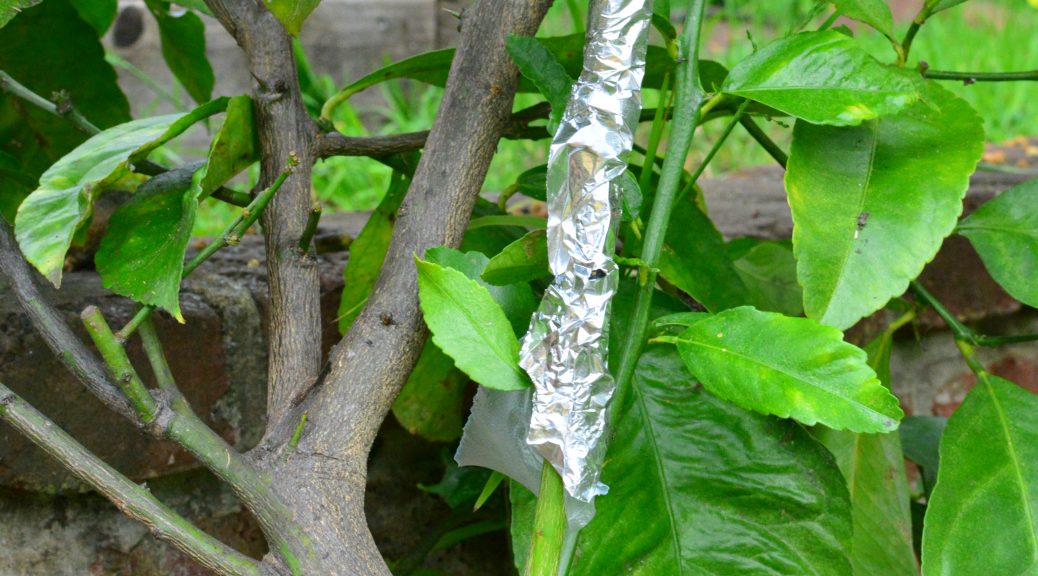 Today I grafted several kinds of satsuma mandarin to my Oakland, California, backyard orange tree (some kind of Navel) and Eureka lemon tree. I followed several Fruit Mentor videos: mostly this one, but grafting to cut-off branches rather than a whole tree; and I did one t-graft (but with a stick rather than a bud; which I now see is perhaps not actually a proper method at all, but we’ll see what happens) and one cleft graft, just in case one works better than the others.

I did not have citrus parafilm so I used a combination of electrical tape pulled taught, then Glad Press n’ Seal (sort of like kitchen version of parafilm, but not as strong), then more electrical tape and a rubber band, then foil on top to keep sunlight from drying it out. I ordered the budwood from CCPP; it was $18 for six buds of four varieties, plus whatever FedEx shipping is; they haven’t sent me an invoice yet. Maybe I don’t know how to count buds properly, but it seems like in many cases they sent me twice what I ordered, two sticks rather than one. I used ’em all, why not have more chances at success.

Here’s the gallery of grafts, we’ll see how they are at the end of the summer.