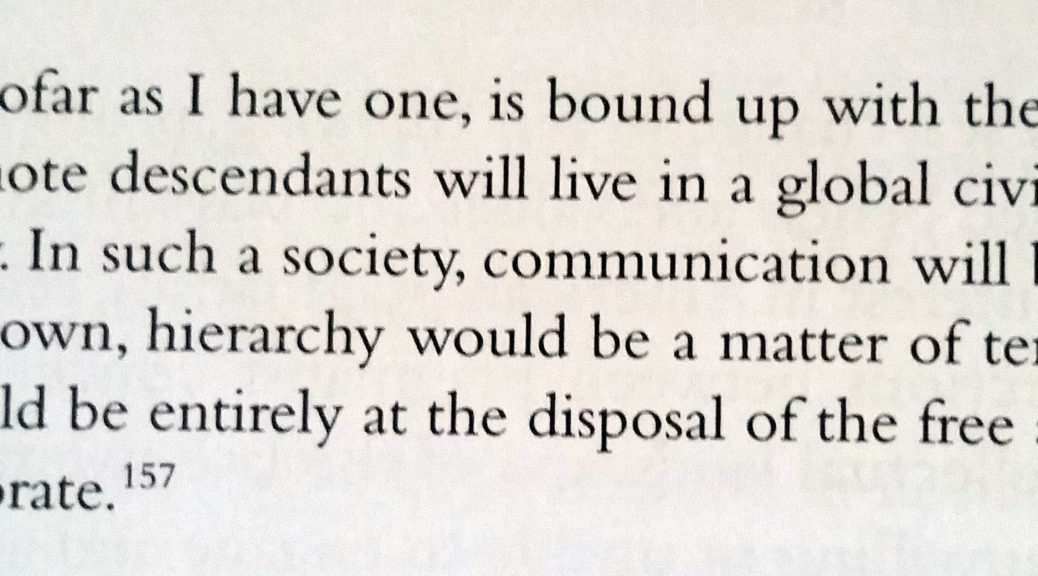 This is a review of The Rorty Reader.

I came across Rorty when I was doing research on the subject of human rights. After reading four other books on the subject (Nussbaum, Sunstein, Bietz, Morsink) I came across a reference to Rorty’s “Human Rights, Rationality, and Sentimentality” Amnesty Lecture and read it. Overall the experience was like playing four games of chess (other authors) and then being hit by a snowball in the face (Rorty).

One of my first reactions was “why was I not previously informed of this man’s existence?” Part of the reason is that I was a science major; but nevertheless it seems like I should at least have heard of him in passing and been vaguely familiar with his ideas. Another initial reaction was “how did this man end up this way?” Not as a value judgement, but just as matter of pure curiosity: he was both alien and made perfect sense at the same time.

Really my first recommendation, if you’re considering reading this book, is to go spend twenty minutes reading the Amnesty Lecture. It’s in this book, but it’s also easily available on the internet. My personal reaction was to check out this book from the library to get a more whole picture of who Rorty is and what his influences were. Voparil’s introduction is readable and helpful to put the works in succession and biographical sequence. Because there is so much to read in the world I partially read the first half of this book, but read more or less solidly through the last half, and ended up buying his book Achieving Our Country, which I hope to read soon.

In the end, for me, the primary interest in Rorty is the combination of his study of language as a tool, his skill as a writer, and his interest in making the world a less cruel place. For those reasons, I find his late writings more compelling, when he started to cut loose from purely academic-philosophical tasks in favor of those that are more generally humanistic and political. If you are not a professional philosopher, or at the very least were not a philosophy major or otherwise have not read a lot of Wittgenstein, Quine, et al, you may still find that you need to keep Wikipedia handy to fill in meaning into the various references he makes, even in the more “political” writings. Because Rorty is such a commanding, voice-filled writer (as compared to, say, Rawls, who writes with all the verve and style of board game rules), the overall effect is to pique interest in what the writers that Rorty refers to signify. Rorty’s name- dropping creates a desire to make that whole web of Rorty’s understanding your own, rather than to confuse or disorient. Rorty’s skill in writing and interest in storytelling should be a model for any person inclined towards making philosophy relevant outside of a siloed academic context.

Like most people apparently — or so says the introduction — I find that I don’t agree with everything Rorty writes. In particular, as a person who studied biology, and for whom the context of humans-as-animals helps in making sense of the world, I find Rorty’s desire to cut loose all human behavior from “natural” causes . . . well, disorienting, and seemingly wrong. (If Rorty weren’t gone I would have loved to read a review by him of, say, Sapolsky’s Behave). But then there is the other half of what he writes where I am learning something, a way of thinking, that is new and that I haven’t considered before. And for the half where I disagree, Rorty often has reasons, framings, not so much as to why a naturalistic way of thinking is wrong, but as to why it is not useful . . . and often I have to concede that is is at least partly right.

Anyway, go read the Amnesty Lecture already if you haven’t. Then go read some book — this one or another — by Rorty. He should be more widely read.