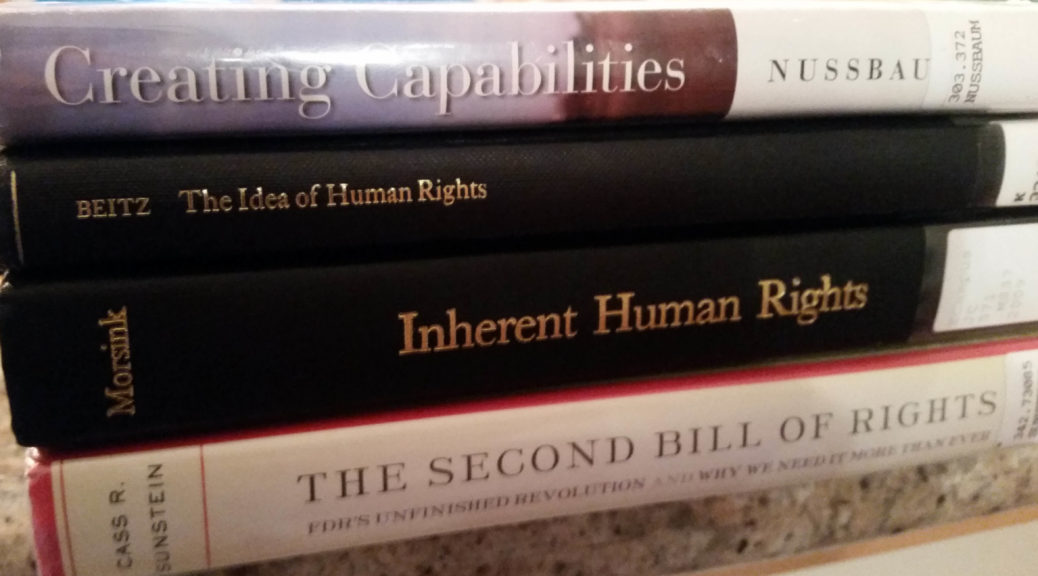 A couple of experiences related to human rights recently got me thinking about what the basis is for their existence, and how to think about them as individuals, as political constructs, and his philosophical constructs. I hope to put together an essay that actually makes sense on that topic, but in the meantime here’s my thoughts on four of the books I’ve read as background reading.

Of the four books listed here, I think this is the most useful for me personally. Two key concepts I got from this book are:

(2) As a political construct, human rights can be an “overlapping consensus”, as a conclusion that can be arrived at from different philosophical constructs: as an Aristotelian observing humans as animals, a Mill-style utilitarian, from various religious traditions, as a Marxist, et cetera.

Ironically, these are not the two concepts of the book is really about. They’re just two concepts that Nussbaum goes over as she is making her way to her primary thesis, which is to describe her “species” of human rights, which is the Capabilities Approach. The capabilities approach I think is a helpful incremental addition to human rights theory, in that it adapts it slightly to make it more inclusive, especially in dealing with people with disabilities and nonhuman animals.

Nussbaum also gives excellent ripostes to arguments that human rights are a sort of cultural imperialism, partly from the way the Universal declaration as drafted, but also that the overlapping consensus extends to other cultures whose values mirror many of those are found in human rights. More importantly, she points out to the reality that the international adoption of human rights instruments is been stronger and a lot of non-Western countries than it has in Western countries (especially the United States as to social economic rights), with India and South Africa as the two most notable examples, using human rights in part as anticolonial political constructs.

Richard Rorty’s Human Rights, Rationality and Sentimentality (pdf) is also very much worth reading. I don’t really agree with his lack of grounding of human rights in some empirical reality – I think human rights does line up with actual common human needs in most cases – but he makes excellent points about how the purpose of human rights should be more pragmatic and about changing the world, rather than about establishing a perfectly coherent account. In this way I find he lines up a little bit with Martha Nussbaum, in that he prioritizes the political use of human rights over philosophical construction. For another way of saying it would be, that neither one of them is particularly bothered that they can’t give a unified logical explanation for why human rights are what they are, because they actually make people’s lives better. I do think, however, that Nussbaum gives the more coherent account with the use of “overlapping consensus” because for different people there are very real groundings in human rights that cause them to be persuaded that they are worthwhile. END_OF_DOCUMENT_TOKEN_TO_BE_REPLACED