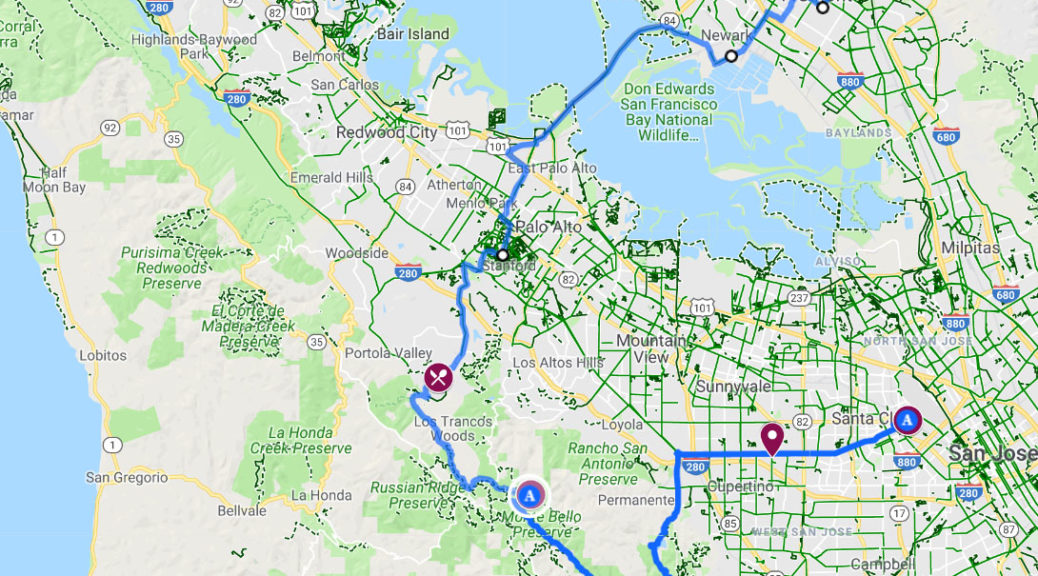 This is a 24 hour overnight bike trip, starting and ending in East San Francisco Bay, to Black Mountain Backpack Camp on the peninsula.

I took Capital Corridor to Santa Clara on day one (San Jose Diridon would actually be better). There’s not that many trains, so check the schedule (carefully! unlike me) beforehand.

Day one was very unremarkable, through the South Bay suburbs and then up a big road climb to the campsite on Montebello Road. Don’t trust Google if it says you can go through Rancho San Antonio, since that includes three miles of pedestrian-only trails.

This is mostly a road trip, but day two has some moderately serious mountain biking. I did it on a touring bike with 35mm tires and moderate mountain biking skills. If you’re not prepared to go over trails that have some ruts roots and rocks on them, then you may want to find another way down it does not go on the Alpine trail.

Although I didn’t plan it this way, what I did – Amtrak->Montebello (uphill)->Black Mountain->Alpine (downhill)->Dumbarton/BART – probably makes the most sense rather than the reverse. More road uphill, more dirt downhill.

When you’re leaving the campsite, keep your warm clothes handy, because you will need them for the descent on Alpine Road.

This was a weekend when my wife, our two kids, and her parents went away for a few days. That gave me a break from family life, and an opportunity to be able to go bikepacking by myself. I live in Oakland, California, and had been to a lot of the best-known campgrounds near me on other bike overnights. A friend recently mentioned that the Black Mountain Backpack Camp in the mid-Peninsula regional open space was a very nice spot – it only had four campsites, with four campers per site, so it would never be particularly crowded. Like most camping sites in the Bay Area, it tends to book up; but I used the fact that I don’t work on Fridays to book a Friday night.

For the way south, I chose to take the Capital Corridor Amtrak line, which went from Oakland to Santa Clara. If I had known what I know now when I was planning the trip (more on that later!) I would have chosen to go to San Jose Diridon station instead, which is another stop further south.

The first day did not go particularly well for me. Even if it had gone well, the route would never be a remarkable ride. But – more foreshadowing! – the second day makes it worth it. I woke up at 6:30 when my son woke up. After several hours of breakfasting, packing, loading, and child-cajoling, my family was finally out of the house 10:30am. I hadn’t had much time to plan this, so it was right then that I looked up when the next train south would be. It seemed like it would be at 12:21. I rushed to finish all of my packing and get the house closed up and bolted out of the door by 11:50, with just enough time to ride to the station. I arrived about two minutes before the train.

The doors opened, the conductor stepped off, and I started to walk on. He looked at me and said “no, sorry this is not your train, it’s going out of service”. Confused, I went to look at the posted schedule. This was a southbound train, but I had failed to notice that its last stop was . . . Oakland. So I was left there waiting for two hours for the correct train to arrive. I had brought a good book, and reading in unusual places is part of the adventure. Still, I couldn’t help but think about how much more comfortable it would’ve been to not leave the house in a panic. Note to self: plan out your transit options before the day of departure. When the correct train did arrive, the actual ride of 50 minutes seemed quick by comparison.

For somebody who has lived in the Bay Area for twenty years, I have spent very little time in the South Bay, where both days of this ride take place. The ride on the first day I could see was going to take me through Cupertino, which is where Apple is headquartered. I didn’t think I had been to Cupertino before, so I was a little bit curious to see the city that was the home of one of America’s largest companies. After this ride, I still can only really tell you about one street in Cupertino, which is Homestead Road, since it went from the train station all the way west across town. The only really nice thing I can say about it is that it has a bike lane. Other than that, it was just strip malls and houses that were only remarkable for how expensive they were. One had a real estate sign posted in front of it: $1.5 million, for an unremarkable three-bedroom bungalow on a trafficky street. Presumably the short commute to Apple’s campus will make it worthwhile for someone.

After studying the parka system’s own maps, I realized that I was going to have to go on a much longer road route that went to the south in order to reach the campground by a route that was bicycle-accessible.

The main road on that route was Montebello Road. If the name “Going To The Sun Road” were not already taken, then it would have been very suitable for Montebello Road. It was a slow climb in lowest gear for almost two hours, heading west up into the setting sun. Along the way I ended up in the middle of a group of six other bikepackers were also going to stay at Black Mountain, at its group campsite. It was a good time to have some other friendly cyclists show up: the conversation took my mind off of the slow, grinding climb. One of the writers, Erin, told me about her life dream of running a cheese farm in France, which is not something you hear about every day. The nice thing about Montebello was that despite the physical exertion there are almost no cars, because it just dead-ends into the open space preserve, which made conversation easier. Near the end it turns to dirt.

The climb ended at the peak of Black Mountain itself. We stopped there for a pre-sunset vista, with San Francisco visible, wreathed with a pocket of fog. From there it was a quick half mile fire road decent to the campground. Based upon the word “backpack” and “mountain” in “Black Mountain Backpack Camp”, I was expecting something maybe a little bit more remote.

It turns out that the camp’s location is on a major trail and is fairly accessible from the west, on the Palo Alto side. So for the first hour, many hikers and mountain bikers were going by on the trail right next to the campground, out for a Friday evening sunset walk or ride. After sunset it very much quieted down, and it was just me and another group of four in an adjacent site, two dads and two boys. The campsites were closer together than one would typically want, but they well-maintained with bear boxes, a pit toilet, and a (non-potable) water spigot. When I filtered the water it still tasted very “green”, which I’m still not sure if that was a problem with the filter being contaminated, or if the water just tasted so bad. Fortunately someone had left a carboy of water, the kind you find a grocery store, in my bear box that came with my campsite, even though it was a two-and-a-half mile walk or ride to the nearest rode. So thank you, anonymous stranger, for the purified water.

Since it was only a few days past the equinox, it was still before 6 AM, but broad daylight, when I got up. I made breakfast, struck camp, and was on my way by 7 AM.

The descent on Bella Vista Trail and Canyon Trail was remarkably fun singletrack:

I could see that the dirt route was going to end on Page Mill Road, which I wasn’t particularly looking forward to. I associate Page Mill with being one of the busier roads in Palo Alto. But that’s to the east of highway 280. Out west where I was, Page Mill was a very quiet road with parks on either side. Google maps redeemed itself from the prior day by then routing me onto the incredibly scenic Alpine Road, which actually starts out as a very rough dirt trail, with the most difficult mountain biking of this trip. It was very beautiful with trees all around and very few houses or development. But there were a lot of rocks, roots, and ruts. I had a good time, but if you don’t consider yourself a mountain biker or want to do this on a road bike, you would want to choose another route.

“Alpine Road (Trail)”, as Google charmingly calls it, ends at a gate where it turns into Alpine Road proper. Alpine Road, the road, is a magnificent, evenly-sloped, smoothly-paved descent that lives up to its name. There is a beautiful creek off to the left and lots of greenery everywhere. It’s in a valley, though, so the combination of shade and humidity makes it quite cold. Although it was the middle of a summer morning, I had to stop and pull out my down jacket halfway down to stay warm enough.

As Alpine Road started to flatten out, I started passing a lot of recreational cyclists going uphill the other way. I several of them sitting around a table outside Roberts Market, which I took as a kind of endorsement, so I made a pit stop. An espresso, a sandwich, and a water refill later, I was back on the road, when then headed towards Palo Alto. I went past the entrance to SLAC, the Stanford particle accelerator, through Stanford campus, and past lots of multi-million-dollar houses (a 5 bedroom was for sale for $5.6 million), before reaching the foot of the Dumbarton Bridge.

On this particular trip, though, I was feeling ready to be home, so kept heading for Fremont BART. I was not particularly expecting Fremont to the remarkable place for cycling . . . but it was. Shortly after the Dumbarton Bridge I noticed a small bike navigation sign for Fremont BART, even though it was seven miles away. And it turned out it was a signed route the entire way.

I’ve gone bike touring a fair amount in Germany where, signed bike routes are ubiquitous. (Often there are so many signed bike routes that it is hard to tell which one you’re on). That’s not so common in the United States. Biking through Fremont on this trip, though, I felt like I was in a little segment of Germany. For the last six miles of the trip, I didn’t have to pay attention to navigation, I just followed the signs. At the Fremont BART station, I sent an email to Fremont’s transportation engineering department telling them all that, and then got on a trail for a short ride home to Oakland.