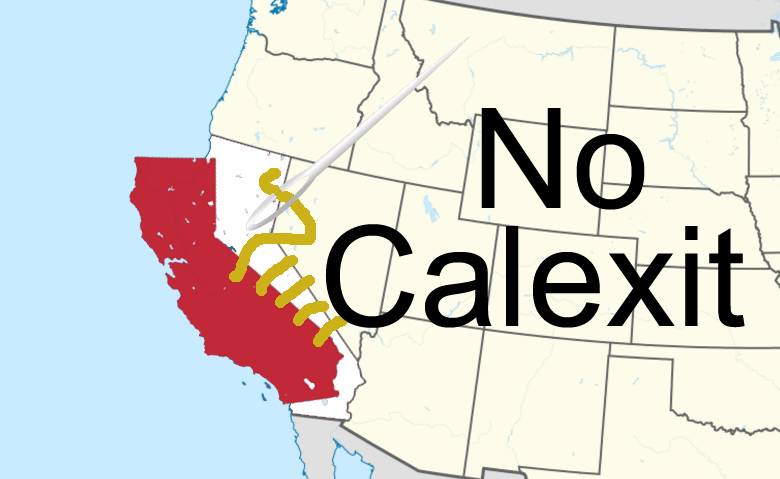 On the eve of the election I was on Facebook and, as things were starting to look grim, one of my friends posted “Jerry Brown will save us.” I thought that was pretty funny and replied about how one of our mutual friends has a “US Out Of California” shirt and maybe I should get one. That was before I knew that Calexit was a serious idea that people were pouring money into.

I would like to just dismiss Calexit as a crazy idea that will never come to pass, but everyone with an education — including me — thought that was the case with Brexit and with Trump and now look where we are. The idea of California trying to secede is getting press in BusinessWeek,[1]Businessweek article on Calexit NYT,[2]NYT on Calexit and elsewhere. I now feel compelled to attack stupid-crazy ideas while it is still small-ish and young and before they grow into a menacing adult stupid-crazy idea, like Trump and Brexit now are.

If you want to get caught up on what Calexit means, check out the Yes California proposal document.[3]Yes California “blue book”, a pdf located here Here’s my summary: it proposes that California try to secede, negotiate an exit with the US, we’ll all keep our US citizenship, keep getting social security and stop paying US taxes, so we can stop paying for the US military and more taxes than California’s fair share, and just be a nice peaceful nation like Iceland or Canada. We’ll use the US dollar and have our own military, which will not so large to allow more spending on infrastructure and education and stuff.

First, a lot of the “Yes California” promises are Trump-like “we’re gonna take everything and screw those other guys over” type statements. They are rosy-eyed, simplistic, painting an unrealistic pie-in-the-sky scenario. Californians will keep US Citizenship, the USA will keep paying Californians social security, no one will ever invade California because it’s the 21 Century and no one does that anymore. Just picking one, the wording on Social Security is laughable: “By the way, collecting your Social Security retirement benefits as a U.S. citizen living in another country also means you will still be automatically covered by premium-free Medicare Part A if you visit the United States and need additional coverage while there,” as if all US laws and regulations would be unaffected by something so nation-shakingly fundamental. If California quits the union, the rest of the United States is going to be in no position to do us any kind of favors. This is evident from the stance of the Brexit negotiations. It will likely be a brutal, exhausting fight. The United States is not easily going to give up 14% of its economy. It is not going to keep paying social security to Californians who are no longer paying US taxes. No one can make assurances about what the US will concede in advance. I think the most likely scenario is a Brexit-style pyrrhic victory where California gets some concessions from the other 49, but only after everyone spends billions of dollars on dealing with both possibilities.

Second, suddenly removing a significant chunk of the United States from the United States would leave a power vacuum that is a threat to international security. Look, I’m a dove-ish kind of guy. I am strongly influenced by the ideas of Noam Chomsky. I think we could slash national defense spending by, I don’t know, a third or a half and spend that on public schools.

America should meddle less in other countries’ affairs for its own profit. But to suddenly rip apart the country would remove the United States from leadership in foreign affairs. Maybe I’m just being selfish for wanting to live in the global superpower, but I think for all the international sins of the United States, the economic and military certainty that it has provided is, on balance, beneficial. American dominance is fading for sure, and fairly quickly. But to end the union like this would be a precipitous change. It’s harder to make a credible Pax Americana argument after we’ve precipitated so many unnecessary wars and interventions, but the effect is real. We won’t find out what regional conflicts the US was suppressing until the US is unable to suppress them anymore, but I think a Calexit would be so distracting and weakening to the global order as to cause conflicts elsewhere: Middle East and India-Pakistan come to mind off the top of my head. That would be radically awful for Californians . . . and everyone else.

Third, and kind of a follow-on to the last, is that I definitely don’t buy promises that California basically needs no significant military. Calexit asserts “California doesn’t pose a threat to any other country so there would be no risk to California of being attacked by another country” and “[T]his is the 21st Century. Unless you’re the Americans, countries typically don’t amass armies, cross oceans, and invade other countries anymore.” We’ve had a nice run of peace, but, to quote Han Solo “Great, kid! Don’t get cocky.” The very fact that someone like Trump can be elected of a wealthy first world democracy makes me feel extra-uncertain of stating any blanket rules, especially about stability and what can and can’t happen. I think it is ironically appropriate that Shervin Pishevar wants to call the new state “New California”, which a region in the Fallout series of post-apocalyptic video games.[4]Fallout Wiki: New California Between this point and the last, California secession seems like a harbinger of that world.

Fourth, the world has enough divisions in it already, we do not need to manufacture another one. The Trump wall, Brexit, Calexit — it’s all attempts at solving your problems by separating yourself from the problem people. While California trends more liberal than the rest of the nation, it does not have a monopoly on progressivism and liberalism. One of the arguments Yes California makes is “We all have a right to self-determination, so let’s let California be liberal and the rest of the country have its conservative tendencies” (not an exact quote, I’m summing up). There are liberals and moderates in the rest of the country, and as a whole the nation is trending liberal over time.[5]Gallup, Conservatives Hang On to Ideology Lead by a Thread Although it looks stark now, seceding is cutting of our nose to spite our face, throwing out the baby with the bathwater, and otherwise self-inflicting deep wounds to make a point. Even if it costs me extra tax dollars and less-than-idea compromises, I want California to be the leader of the United States, not the bratty kid who quit because he thought he was better than everyone else.

Five, it feels emotionally and culturally wrong. This argument may not hit native Californians or immigrants from other countries, but: my people and my identity are not Californian, they are Americans. I’ve lived in California for seventeen years now — more than I have in any other state — but my friends and family are scattered across the nation: Florida, Indiana, Illinois, Michigan, D.C. come to mind. These are my people. I will not be a citizen of another nation than they are. Some of them probably even voted for Trump. I plan to drag them, perhaps kicking and screaming, into a progressively-governed 21st century. If the national Democratic Party got its act together and was a Bernie Sanders kind of party that has a less corporate outlook and supports unions, workers, and ordinary folks, I think there is easily a majority coalition of Americans to be made that has “California values.” I want California to be the Germany of the United States — the part that strives valiantly to pull everyone together even when they’re being self-centered assholes — not the UK.

Sixth, a lot of the momentum of the Calexit is driven by Silicon Valley money. My main occupation is currently as an attorney, but I am also a programmer.[6]github/xenotropic I have a degree in computer science and wrote software for genome sequencing for four years. I love you Silicon Valley, you too are my people, but now is not the time to have another top-down elitist initiative that is out of touch with what ordinary people need. Silicon Valley seems to have pretty much just woken up politically. I don’t blame you, it’s been a pretty easy ride until just now and I’m suddenly feeling about ten times more awake myself. Take a minute, or a few months, to breathe and perhaps read some more Noam Chomsky[7]Noam Chomsky, Manufacturing Consent, on Amazon (remember him from computer theory class? Same dude) before you go spending money to market, advertise, and manufacture consent for acute, radical solutions. Calexit seems like Silicon Valley going for a nuclear option without having tried ordinary diplomacy first.

Here’s Some Constructive Things Silicon Valley Could Do. If you want to do something new and different, how about founding a Science Party?[8]Wikipedia: Science Party Australia If you want to do something that advances Silicon Valley’s interests in a pragmatic way, how about laying ground for someone to run against Feinstein in 2018? She’s been pretty good, but seems clueless on technology.[9]TechCrunch, Burr-Feinstein encryption bill is officially here in all its scary glory Or perhaps bring yourself to work with people in other states: if you want California to have more leverage, how about spending money to promote the National Popular Vote Interstate Compact in blue states that haven’t adopted it, so California presidential votes are equivalent.[10]Wikipedia, National Popular Vote Interstate Compact[11]My earlier post: Abolish the Electoral College Or work on helping progressives in other states work on the 2018 midterm elections.

Everyone wants change. Bernie supporters wanted change, Trump people want change; this was one of the most salient features of the exit polls.[12]WaPo, The 13 most amazing findings in the 2016 exit poll, see #8 I know it seems like everything is wrong. I want lots of change. But a Calexit is too much change all at once, and it is likely to be nasty, difficult, expensive, vituperative change. It is another Brexit, a vote for change without thinking through what that change means.